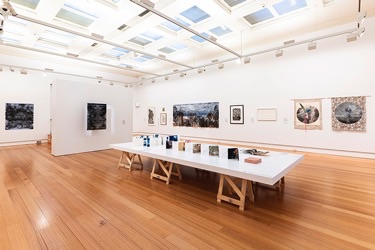 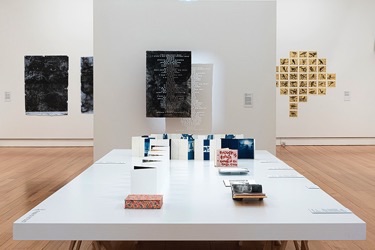 Language is fundamental to the recording and communication of seismic events such as George Floyd’s murder in May 2020. He died after being handcuffed and pinned to the ground by an officer’s knee for more than nine minutes. The work depicts an upside-down head rendered in gestural etched marks, suspended above the urban terrain, eyes, mouth and tongue contorted in pain. George Floyds last words and heartfelt pleas for mercy were recorded by brave onlooker Darnella Frazier; Frazier posted her recording because she believed the world needed to know.

The words form a central body of apertures lasercut into a banner-like form. Their resonating impact reflected in projected shadow text on the wall behind. The dirty pink swirls on the reverse side of the work symbolise the pooled blood of George Floyd and all black Americans killed with impunity through history. The bottle objects, symbolic Molotov cocktails, contextualise the work as a call to arms and public action, like that of the global protests in support of the Black Lives Matter Movement and shared outrage at George Floyd’s murder.