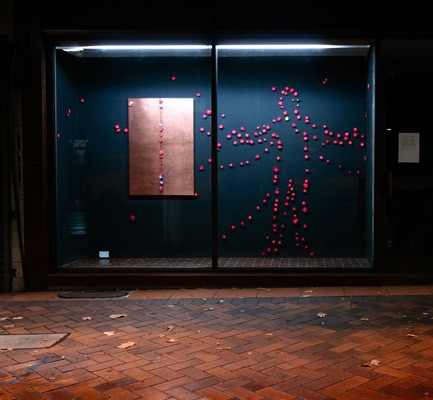 Their Loss is Our Loss

The Indigenous Honour Roll titled, He came and joined the colours, mixes ‘Indigenous Poppies,’ created with the colours of the Australian Aboriginal Flag and ‘National Poppies’ using the colours and symbols from Australia’s National flag. It honours the sacrifice and patriotism of Indigenous soldiers and personnel, with particular reference to 2nd World War Sapper Bert Beros’ poem, ‘The Coloured Digger’, and was first exhibited at the Damien Minton Gallery in Redfern as part of The Coloured Digger II exhibition in 2008.

The month-long exhibition was timed to coincide with ANZAC Day, a National Day to commemorate sacrifice, and specifically installed in SLOT because of its proximity to Redfern and its long association with Indigenous people.

I was granted permission to use the colours of the Australian Aboriginal Flag by Pastor Ray Minniecon, (Redfern ANZAC Day march Coordinator), when I first conceived of an ‘Indigenous Poppy’ for the exhibition at the Damien Minton Gallery.

The City of Sydney featured the work in the ‘What’s On’ events calendar and home page: http://whatson.cityofsydney.nsw.gov.au/events/their-loss-is-our-loss